Check out the new blog over at https://katypagedesigns.blogspot.com/
Posted by Unknown at 18:56 No comments:

Holy Guacamole! It's Thursday - I hadn't realised... my bad. I'm going to blame it being November, so my writing energies being used up on Nano, and also the fact I was away at the weekend charging around like a lunatic with a crossbow (Twisted Tales... best ever)

AAaaaanyway bridesmaids Dress Number 3 was for Gwennan – Gwennan is my godsister, and as she’s six months older than me I’ve known her my whole life, and she’s been my best friend since I knew what a best friend was – this is everything to do with her personality and nothing to do with the fact that her dress fitted her after just one fitting… Oh, and she chose a pattern with only 3 main pieces, nothing to do with that at all.

Also I can hear you arguing that Godsisters isn’t a thing, but I’ll have you know that the word ‘Gossip’ comes from the information you share with your god-siblings… so yeah, it’s a thing. I’m educational.
Read more »
Posted by Unknown at 12:42 2 comments: 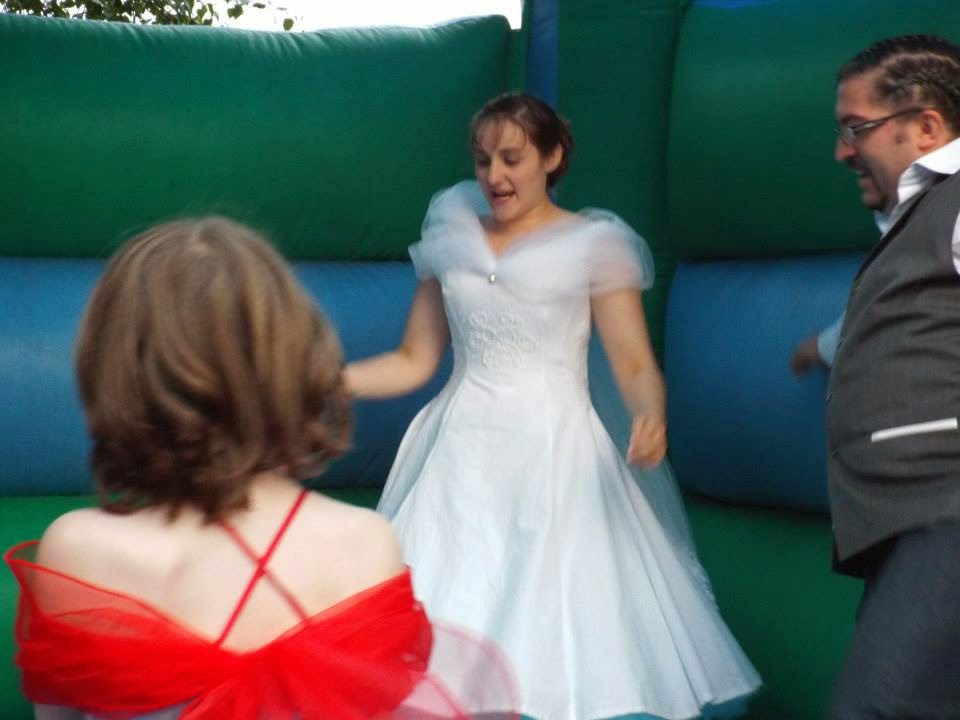 The next bridesmaid's dress I'll be showing you is that of Freja's - my 9 year old god-daughter, who decided that one outfit simply wasn't enough. I'm sure you all know what a fan I am of the blue/red colour scheme, so I was really pleased when she picked this out. Again, she wanted spaghetti straps (I tell you, they're what all sophisticated young ladies wear these days), which I carried on to be the corset lacing down the back as I had done in her sister's dress (although Freja decided to have a modesty panel - no good picture of that though). I love the way the crossed over straps look - so elegant!
Read more »
Posted by Unknown at 08:00 No comments:


So - let's start with some bridesmaid's dresses. I asked my bridesmaids to design their own dresses, and whilst the adults had a little steering in the direction of colour and style, my two god-daughters (who were 8 and 9 on the day of the wedding) had complete free reign with their outfits.


Faye is eight years old (and used to be known as Erin, and before that Poppy, and before that Erin again - she's a fickle pickle! I'd complain, but I was exactly the same at her age), and she had some really specific design features that she wanted, foremost of which was 'spaghetti straps' which I understand are the highlight of sophistication! (Actually, initially both girls wanted strapless dresses, but we managed to talk them out of that...)
I made this pattern from Butterick 4385 and it was a relatively easy sew, although the pattern sizes are 7-12, and I had to make the 8 year old's mostly in the age & size, and the 9 year old's I had to grade down from the age 7!

Many thanks to all the people who took photographs at my wedding (most notably luthaisea and vollsanger) - going back to work after our staycation honeymoon many people asked me if I had any photographs... to which I responded in a baffled tone "No... I didn't take any... I was a bit busy"


Anyway, so on to the decorations.

Outside the church we had some hessian bunting which I made myself - it was super quick and easy to do, just stencilled letters and white acrylic paint - couldn't have been easier. I made it so they said our christian names on the way in, and then Mr & Mrs on the way out - super cute, almost vomit worthy, but if there's one day I can get away with twee decorations it's my wedding day right?

Email ThisBlogThis!Share to TwitterShare to FacebookShare to Pinterest
Labels: Wedding 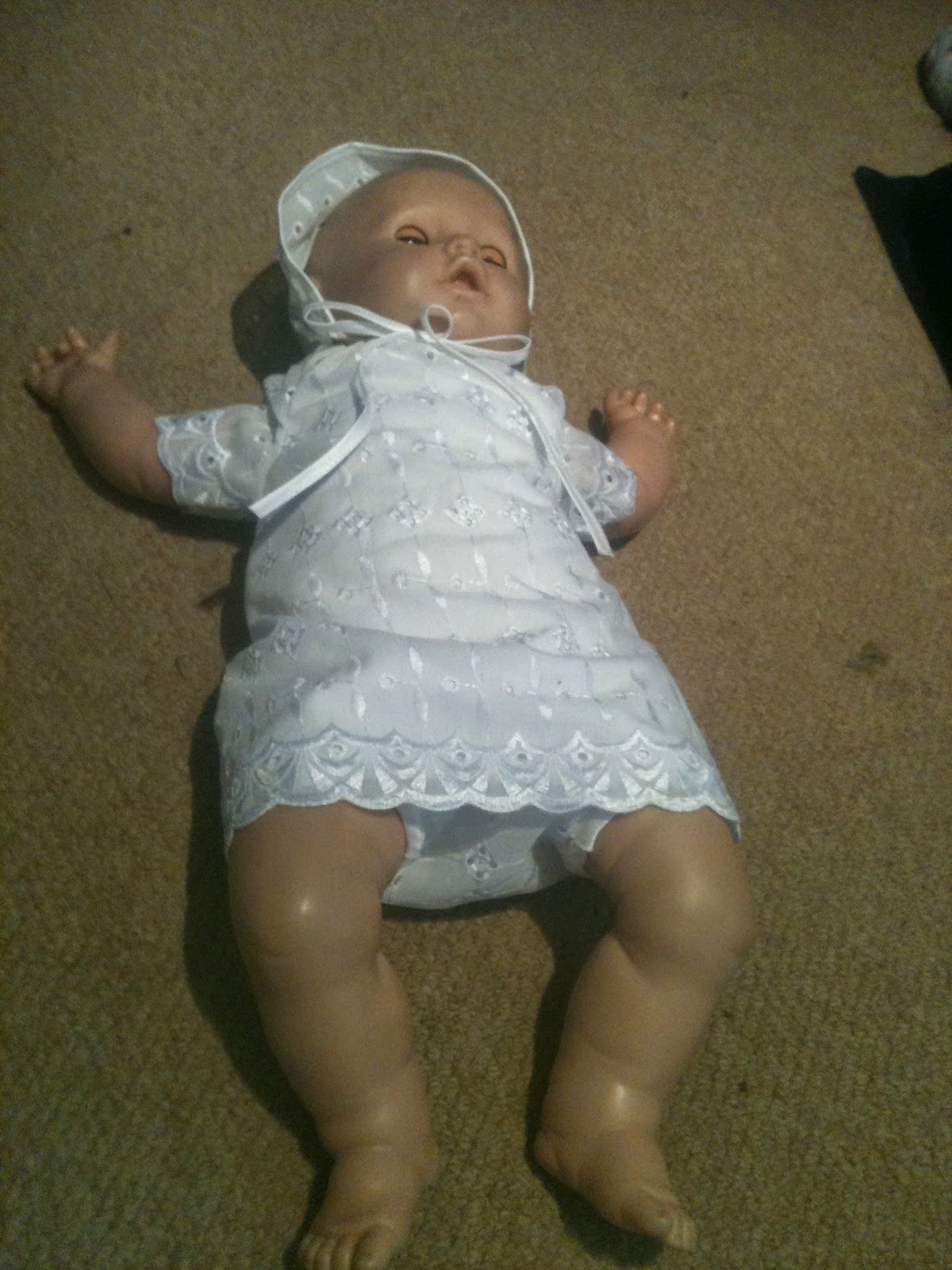 So, before I throw you fully into wedding madness, something else FAR MORE IMPORTANT happened in September. My godsister had a baby girl! This was awesome for many reasons, including it being her first child - and she is utterly gorgeous! My godsister lives way out in crete, so I can't go and meet the little darling, but I could send her some presents. Please excuse the creepy model in these pictures, it's a doll I'm fixing which my niece broke, and was a convenient model to use.

I decided to whip up a couple of little peasant dresses, just like I made for my cousin's baby girl. The first of the dresses I made absolutely true to the pattern - although I lined it, as I made it out of broderie anglaise. I used the same lining technique as I did on my maxi dress (although obviously much MUCH smaller) and also lined the adorable matching bloomers.

I AM SO SORRY (and so MARRIED)


I haven't posted in FOREVER. I got wrapped in up moving house and getting married and doing all sorts of important things like that - so I have some posts photographed but not yet written, that you shall get to see soon, and hopefully pictures of my new house as it shapes up nicely (the kitchen has gone from HORRIFIC to AWESOME)

Obviously, I will be doing full blog posts regarding each intricate detail of the wedding - I made 4 bridesmaids dresses, my own dress, designed my bouquets (which my bridesmaids, God love them, made the night before the wedding, whilst I was sat up hemming my wedding dress...), and a bunch of the decorations... plus a LOT of jelly, but I don't think there are photographs of that!


In the mean time, I've filched some pictures that friends have put up on social media sites, so I'll share you some loveliness from the day.